Kick Start QLD: Inside plans to save state after coronavirus pandemic

Premier Annastacia Palaszczuk has been urged to make a major call to help Queensland’s devastated tourism industry, as leaders identify the 20 most important projects across the state that will get jobs and the economy firing. SEE THE FULL LIST.

SKYWAYS in the Whitsundays and on the Gold Coast, a surfing theme park in Yeppoon, and upgrading a rainforest castle and Aboriginal rock art attraction in North Queensland are on a wishlist of recovery projects for Queensland’s embattled tourism industry.

One state may be exempt to QLD border rules

Tourism leaders have identified about 20 projects they want to see get off the ground to reboot the $27 billion industry which has been crippled by the COVID-19 pandemic.

They range from the $2 billion Great Keppel Island Resort redevelopment to building 25 cabins at the historic Paronella Park rainforest castle attraction on the Cassowary Coast.

Queensland Tourism Industry Council chief executive Daniel Gschwind said while not all the projects were ‘shovel-ready’, they could be activated quickly with the help of state and federal governments and local councils to boost the recovery.

“As we are planning for the reboot of our industry post-COVID-19, it is the right moment to consider how we can turn the crisis into an opportunity for the communities that depend on tourism,” he said.

“Total disruption is what we have been subjected to (so) let us rebuild better than ever.

“If we want to strengthen our competitive position in a tough consumer market, we must have the best experiences in place, supported by world-class infrastructure.”

A quarter of jobs in hospitality and tourism have vanished since COVID-19 forced Queensland to shut its borders and close pubs, clubs and eateries.

New payroll data reveals that 6.1 per cent of all jobs in Queensland – or roughly one in 15 jobs – have disappeared since shutdowns began in March. 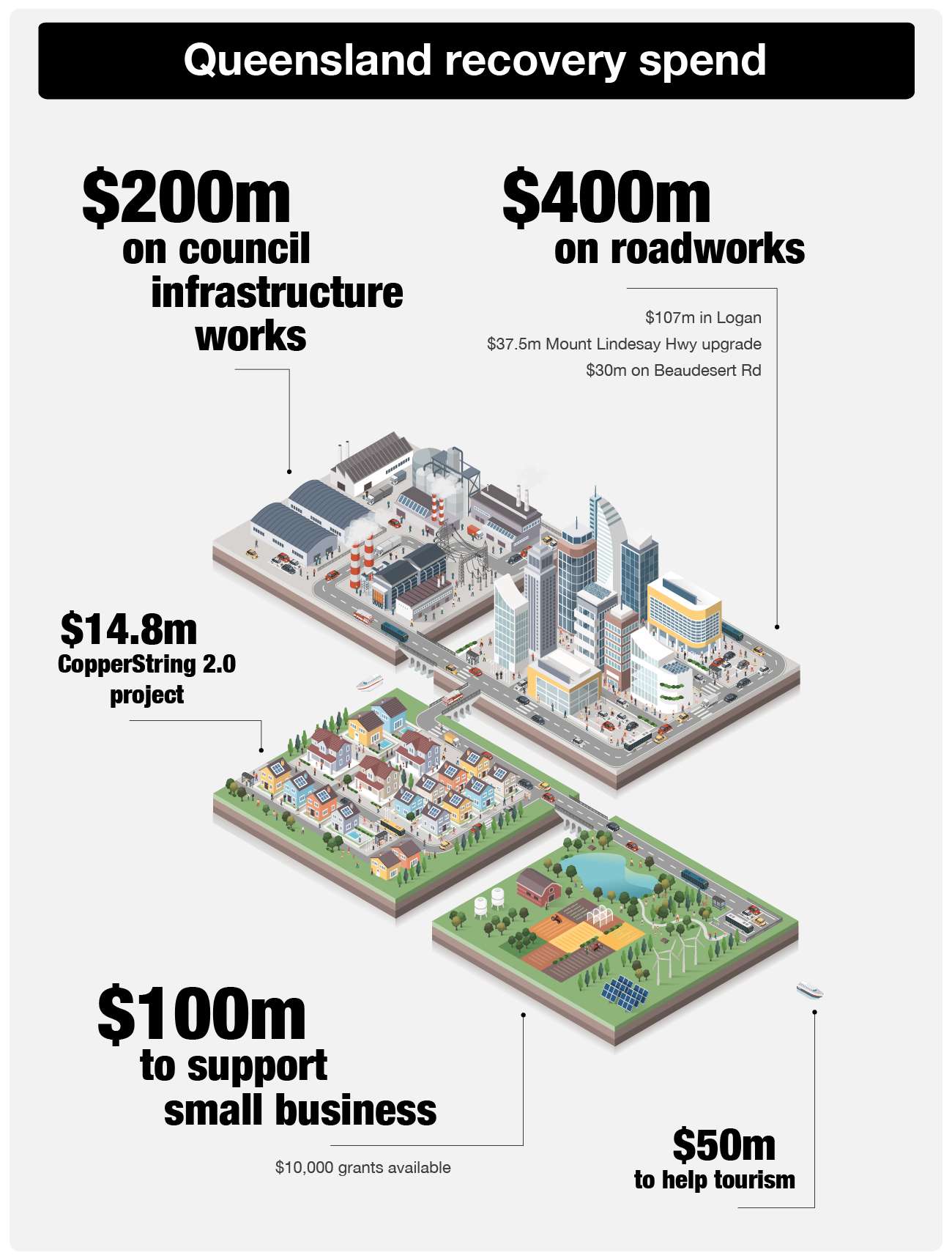 Tourism was the hardest-hit industry, with one in five workers sacked or stood down without pay in accommodation and food services, and the arts and recreation sector.

Young Queenslanders are twice as likely to have lost work, with 12.4 per cent of jobs for the under-20s vanishing between March 14 and May 2.

Mr Gscwhind said most of the projects on the list were in regional areas that had been hard-hit by the coronavirus lockdown, with all identified locally as priorities.

They include proposed cable-car projects in the Whitsundays and on the Gold Coast, where a “skyway” to Springbrook has long been sought by the local tourism industry.

Sunshine Coast-based Altum Property Group says it is ready to start work on the first stage of the planned 12-year project – forecast to create more than 2000 jobs – but is awaiting the green light from the State Government which has pledged $25 million to connect power to the island.

Commercialising a prototype surfing wave park, built by Gold Coast-based Surf Lakes at Yeppoon, is another project QTIC is keen to get up to stimulate regional tourism but Mr Gschwind said this would cost about $10 million.

Tourism Minister Kate Jones said a $50 million emergency tourism fund announced on Tuesday by her Government could be used for projects such as the Paronella Park upgrade and improvements to the Jaramali Rock Art attraction.

In the Brisbane region, he wants to see work start sooner rather than later on the mooted Brisbane Live indoor arena at Roma St, a ‘River Hub’ overnight boat berthing facility on the Brisbane River and indigenous tourism projects – including a whale interpretative centre – on North Stradbroke Island.

“We have a well-considered portfolio of regional opportunities that are just waiting to be activated in this post-COVID recovery and we are keen to work with the State Government to progress them,” Mr Gschwind said.

“As they say ‘fortune favours the brave’, never a moment like this to get motivated for a brighter future.”

THE PROJECTS QLD NEEDS TO SHINE

Expansion of the Great Sandy Marina and Urangan Harbour.

Commercialisation of beaches for dining